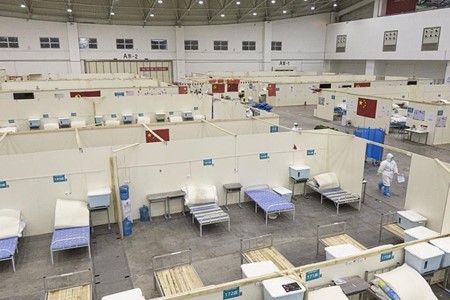 Aerial photo taken on March 7, 2020 shows an inside view of the "Wuhan Livingroom" makeshift hospital in Wuhan, central China's Hubei Province. All patients at the "Wuhan Livingroom" makeshift hospital have been discharged or transferred by Saturday afternoon. The hospital will be fully disinfected and is expected to officially close on Sunday. Photo: Xinhua

Eleven out of 14 Fang Cang makeshift hospitals in the epicenter Wuhan, in Central China's Hubei Province, purposely built for the COVID-19 treatment have closed as of Sunday, which experts said reflected the epidemic is under control and new infections continue to decline as of recently.

The makeshift hospitals have contributed significantly amid the viral outbreak, Yang Zhanqiu, deputy director of the pathogen biology department at Wuhan University, told the Global Times on Sunday.

Such hospitals were immediately constructed to admit patients exhibiting lighter symptoms, which eased urgent demand for more hospital beds and helped control the viral spread during the rapid surge of new infections in Wuhan, said Yang.

The closure of the hospitals reflected the epidemic is under control and new infections continue to decline as of recently, Yang noted.

The largest of the hospitals Keting Fang Cang hospital in Dongxihu district, Wuhan, which admitted more than 1,700 patients during the epidemic, announced its closure on Sunday, The Paper reported.

The Keting Fang Cang hospital, the biggest makeshift hospital built in Wuhan, had 1,462 beds and more than 1,100 medical staff members from areas across China. The hospital has admitted a total of 1,760 patients since February 7, among whom 868 have been cured.

Protective materials and medicines in the hospital were being offloaded on Sunday, and the first round of cleaning and disinfection work has been completed.

Also, medical staff will continue to follow up on discharged patients.

Another 10 makeshift hospitals in Wuhan have also closed in March.

The Fang Cang hospital in Qiaokou district, the first of the kind which closed on March 1, had admitted 330 patients from February 11, among whom 32 were severe, 232 were cured and discharged, China Youth Daily reported on March 1.

According to data published by China's National Health Commission, a further 41 infections of COVID-19 were confirmed on Saturday while 74 were confirmed on Friday and 126 on Thursday, which shows a falling trend in the city.

Patients with mild infections staying in the makeshift hospitals often took prescription of traditional Chinese medicines (TCM) and some were successfully cured, suggesting that TCM therapy can assist disease resistance and play an important role in treating the infectious disease, Yang also added.