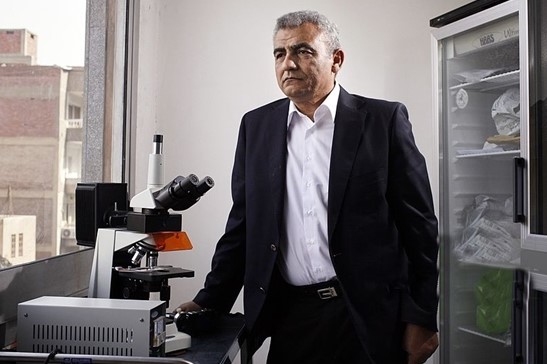 China has successfully used the best scientific ways and most advanced technologies in all the stages of dealing with the COVID-19, said an Egyptian renowned microbiology professor, who first diagnosed a similar coronavirus in 2012, in a recent interview with Xinhua.

"China has been successful in combating COVID-19 and maintaining a massive infection control of the epidemic, providing scientific production being used worldwide in diagnosing the novel virus," said Ali Mohamed Zaki, professor of microbiology and immunity at the Faculty of Medicine of Ain Shams University.

"I believe there's no country in the world that could do better than what China has done in combating the novel coronavirus," said the Egyptian professor.

He emphasized that China "did a great job" in its very early detection of infected cases, decoding COVID-19, knowing its complete sequence and sending it to the GenBank, which helped scientists worldwide do diagnostic kits.

"By this way of combating COVID-19, China proves that it is like any world big power in healthcare and medical technologies and even with greater expertise," said the Egyptian professor.

Zaki pointed out that both MERS and SARS were coronaviruses transmitted from animals to humans.

The MERS fatality rate was as high as 34 percent and that of SARS was about 10 percent, while the COVID-19 fatality rate is less than 3.4 percent so far, but the final percentage will be stated after the epidemic is over, Zaki said.

"Any epidemic naturally comes to an end, because those infected and cured become immune and the 'herd immunity' takes effect. In other words, when immunity among people increases, the infection rate decreases," Zaki clarified.

"The epidemic will inevitably come to an end and everything will soon come back to normal," he added.

Zaki wondered why some would ask China to apologize for the virus outbreak.

"Why would China apologize? It has done its best in combating the virus, worked hard on it, dealt with it professionally and transparently, and provided relevant scientific production useful for the whole world," he said.

The professor described China's measures in combating the novel coronavirus as "excellent," noting that the giant Asian country makes best use of technology in all stages of dealing with COVID-19 and immediately shares all the information it reaches.

He expressed hope to find a vaccine for COVID-19, noting that the epidemic might even vanish before a vaccine is made.

The good news, according to the Egyptian microbiology professor, is that "the infection rate of the epidemic is getting stable and its curve is starting to be horizontal inside China. This is an indication of the virus decline and the beginning of its end."