The market scale of LED lighting has continued to grow with the driving forces from the emerging market and the transition of traditional lighting to LED lighting. The expanding market has attracted many companies to join, leading to escalating competition and sliding profit. Many LED companies have thus decided to quit their lighting business or to reorganize their strategies.

GE to complete sale of its lighting business by the end of 2018
The lighting business of GE includes GE Lighting, which focuses on consumer lighting applications, and Current, powered by GE, which provides energy efficiency solutions. In GE’s 2017 annual report, the company has addressed the global competition in the lighting market, noting that “Lighting faces competition from businesses operating with global presence and with deep energy domain expertise. Our products and services sold to end customers are often subject to a number of regulatory specification and performance standards under different federal, state, foreign and energy industry standards.”

To take a look into the annual report of GE in 2017 which shows the earnings of each segments in the past few year, it is not so surprise to understand why the company has decided to sell its lighting business. The profit margin of GE’s lighting segment from 2013 to 2017 was 4.6%, 5.1%, 7.3%, 4.1% and 4.7% respectively. In comparison with other segments whose profit margin vary from 10-20% in the pass few year, lighting has been the least profitable segment of the company. 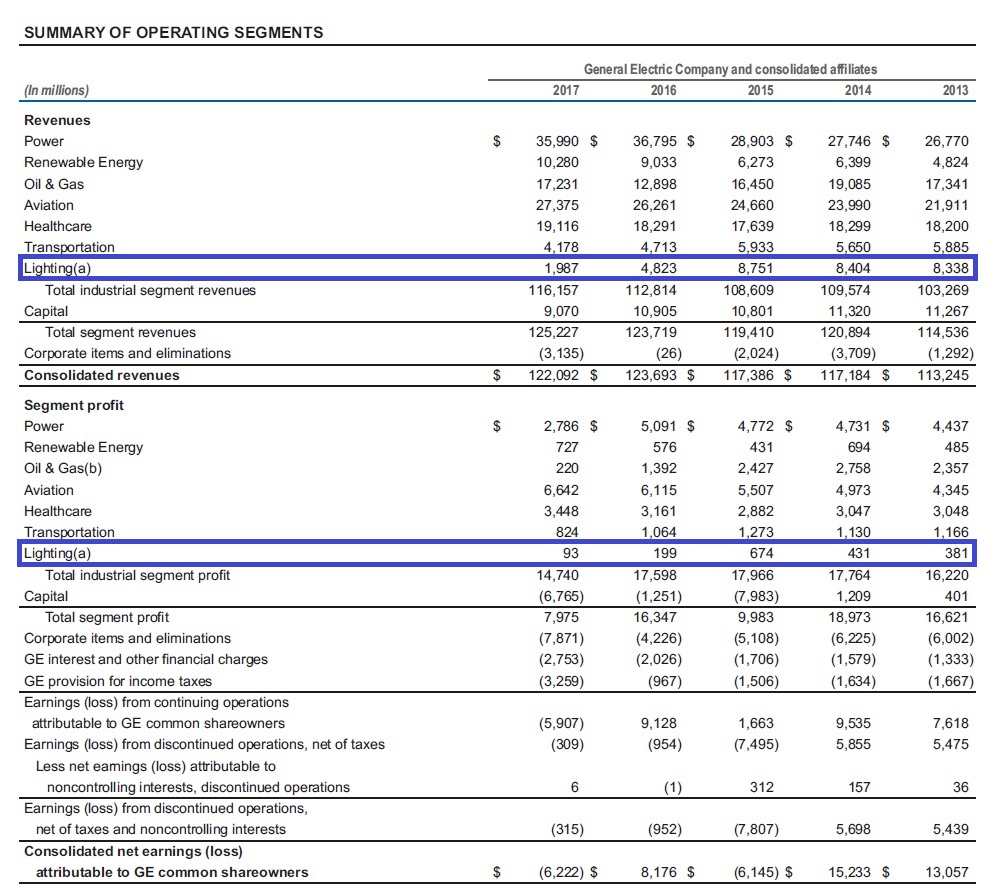 Since 2018, GE has closed the lighting business in Europe, the Middle East, Africa, Turkey and its Global Automotive Lighting businesses. The company expects to sell the remaining lighting business by the end of the year to complete the transaction. Previously it was rumored that Chinese lighting companies MLS Co. and Foshan Electrical and Lighting Co. might be bidding GE’s lighting business. The rumors might not come true due to the current tensity between the U.S. and China.

The luminaires business of Osram belongs to the segment of Lighting Solution and System (LSS). The earnings of the segment in fiscal year 2014 to 2017* were all negative when first calculated. In 2017, the segment of LSS has lost EUR 72 million (USD$ 83.7 million) despite its revenue of EUR 989 million. The deficit of the segment in recent years indicates that the luminaires business might have eroded the earning of the company. For the third quarter of fiscal year 2018, Osram’s LSS segment still registered a negative EBITDA.

Meanwhile, the latest financial report of Cree revealed the company’s profit for its fiscal year 2018**. The gross profit and the gross margin of its lighting product segment have both decreased. Cree has expanded the capacity of its Wolfspeed segment and LED products segment, gradually shifting its focus to businesses with higher margin.